January 6, 2021
Analysts are continuing to back Inventiva’s lanifibranor as a potential “best-in-class” drug for the fatty liver disease NASH, as the company prepares for the launch of a phase 3 trial in spring.

A team of analysts from Jefferies led by Lucy Codrington noted the design of the trial, which will have a dual goal measuring both liver inflammation and scarring could give an edge over potential competitors.

There are no approved drugs for NASH – full name non-alcoholic steatohepatitis – after the FDA rejected Intercept’s obeticholic acid last year.

The regulator said it wanted more long-term safety and efficacy data from the REGENERATE study before making a final decision on the drug, which had been expected to be the first entrant into a likely multi-billion dollar market niche.

According to the latest analysis from Jefferies the design for the phase 3 NATIVE3 study from Inventiva has been okayed by regulators and the case for lanifribanor has already been boosted by “stellar” results in phase 2.

The decision to include two endpoints of inflammation and scarring is important because improvements in both these measures are likely to lead to an improved prognosis.

Lanifibranor is also taken orally, making it convenient for patients and Inventiva is hoping to offer a choice of two doses offering doctors the ability lower the strength of the medication to control side-effects such as oedema.

The trial will take a while however, with results not due until the second half of 2023, with sales forecast to peak at around $2.6 billion annually if approved.

The Jefferies team also noted that the French biotech is also partnered with AbbVie to develop an oral successor to its inflammatory diseases blockbuster Humira (adalimumab).

Proof-of-concept phase 1b data is due from the drug codenamed ABBV-157 is due this quarter, which will help AbbVie decide on whether to continue development.

Only this morning, Novo Nordisk selected the first candidate from a project with Dicerna to find new gene-silencing drugs to treat liver-related diseases including NASH. 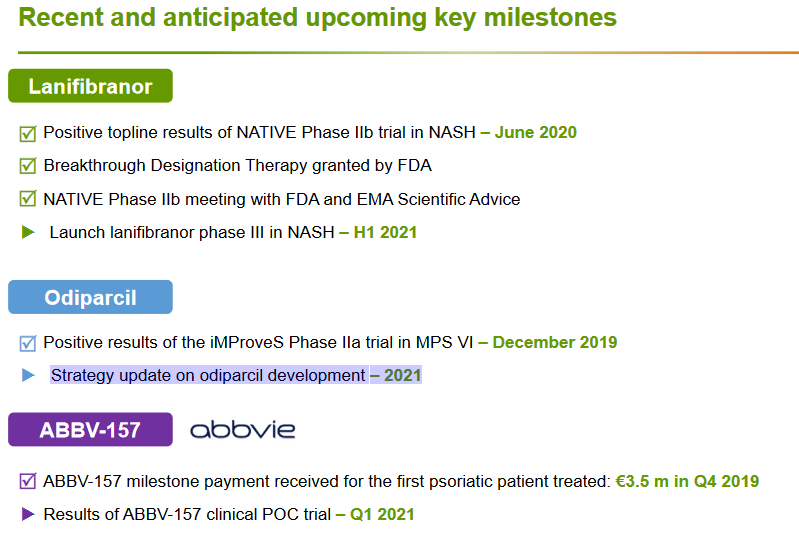